A guide to Princeton's resources on Russia's greatest poet. 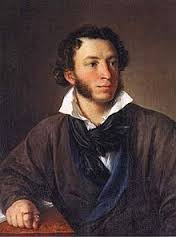 Pushkin E-Resources at Princeton and Beyond

Essays on aspects of Pushkin's life and work by well-known Pushkin scholars.  Access is limited to members of the Princeton University community.  Also available in print: (F) PG3356 .C36 2006

Part of the Dictionary of Literary Biography series.  Includes a biographical/critical essay on Pushkin, together with a lengthy multipartite bibliography.  Access is limited to members of the Princeton University community.  Also available in print: (RCPPA) PN451 .D53 v.205

Pushkin on Pushkin in the Princeton University Library

Includes all of Pushkin's diaries and jottings, together with an essay and commentary by the compiler.  Name index.  From the 'Literaturnye pamiatniki' series.

Eight-volume edition of Pushkin's notebooks, including both facsimiles of the original manuscript and the text.  In Russian, with bilingual introductions.

Pushkin's correspondence in a two-volume edition.

Pushkin's letters to his wife, collected in one volume.  From the 'Literaturnye pamiatniki' series.

Biographies and Appreciations of Pushkin in the Princeton University Library

Detailed, for the most part day-by-day chronology of Pushkin's life and work.  In four volumes, with a fifth supplementary volume of indices, extra material, and bibliography.

Interesting biography of Pushkin told entirely through excerpts from documentary source materials (letters, reminiscences of contemporaries, images, etc.).  In two volumes; index for both volumes at the end of the second.  Facsimile reprint of the 1936 Sovetskii pisatel' edition.

The most recent English-language biography of Pushkin; aimed at a general, rather than a scholarly, audience.  Another relatively recent biography in English is Pushkin: the man and his age by Robin Edmonds (London: Macmillan, 1994) in Firestone: PG3350 .E356 1994.

Annenkov's was the first biographical work to be published about Pushkin.  The censorship of the time limited his ability to use the unique source material at his disposal in an effective way, but the book remains an important work.  This is a photocopy of the 1873 second edition; it is in pre-revolutionary script.  Also in Firestone is a 2007 reprint of the 1855 first edition in modern script, published as part of the 'IA liubliu Pushkina' series: PG 3350.A654 0207.

Popular biography of Pushkin by Russian-French academician Henri Troyat (born Lev Tarassov).  Controversial for its liberties, but amusing to read.  A good translation into English (by Nancy Amphoux) is in Firestone: PG3350 .T714 1970.

Two-volume biography of Pushkin, written by one of the editors of his collected works and issued by the Soviet Academy of Sciences.

Biography of Pushkin by a noted Soviet scholar; issued as one of the 'Zhizn' zamechatel'nykh liudei' series.

Ongoing series of volumes of Pushkin research and source materials.  Princeton owns through 2004.

Analysis of Pushkin's poetry and drama (including Evgenii Onegin), attempting to put him into the Russian and larger European context.

Volume containing Lotman's biography of Pushkin (originally written for students), a selection of his essays and articles on Pushkin, and his famous commentary on Evgenii Onegin.

Text of the speech read by Dostoyevsky after the dedication of the Pushkin monument, together with an essay on Pushkin.

Essays by Akhmatova on Pushkin's life and works.

Collection of famous Russian essays, critiques, and speeches on Pushkin and his legacy, translated into English.

Bilingual collection of essays on Pushkin's life and work by eminent Pushkinists.